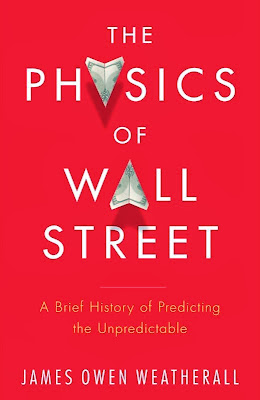 What’s the book The Physics of Wall Street all about?

The Physics of Wall Street tells the story of how, over the last hundred years, an increasing number of ideas—and, since the late 1970s, people as well—from fields such as physics and mathematics have migrated to finance.   These new ideas have changed how financial markets work in profound and lasting ways, and so if we want to understand financial markets, as investors or as policy-makers, we need to understand the role that physics and mathematics has come to play.  Most importantly, I argue that, if used carefully, these ideas can provide very effective tools for investors. But they also introduce significant new risks, including some that contributed to the 2007-08 financial crisis.  One of my main goals in the book is to give some insight into how we can use these tools more effectively, and hopefully avoid future crises.

Can you tell us about your background and how did you come up with the idea of writing the book?

I started working on this book in the fall of 2008, during the most disastrous part of the financial crisis in the U.S.  At the time, I was living in Hoboken, NJ, right across the Hudson River from Wall Street, and finishing a PhD dissertation in Physics and Mathematical Science.  Like many people, I was fascinating by the collapse of some of the oldest financial institutions in the U.S., but I was particularly drawn to the large number of stories about how physicists had somehow contributed to the crisis.  It seemed implausible to me that people with backgrounds like mine could have had some special role to play.  Sure, I knew some physics majors who had gone to work for Wall Street banks, but I also knew plenty of economics majors and even philosophy majors who had done so, too.  Why were the physicists to blame?   So I decided to dig a little bit into what role physics and physicists had come to play in finance.  It turned out that physicists—and others, such as mathematicians and computer scientists—really had shaped modern finance in ways I never imagined.

For the people not familiar with the term, can you explain briefly who are the Quants?

“Quant” is short for “quantitative”, as in either quantitative traders, quantitative analysts, or even quantitative hedge funds.  It can apply to anyone who takes a numbers-based approach to markets, but usually it refers specifically to people with backgrounds in technical fields such as physics or mathematics who use sophisticated mathematical models to either try to predict some feature of market behavior or to analyze risk. (Often these two tasks go hand in hand.)

In the book you argue that physics is an instrument not a model itself. What are the most common mathematical errors on predicting the markets? The ones that some people think that partly caused the 2008 financial crisis.

The way I think about it, physicists are very good at developing fairly simple mathematical models that provide an approximate or idealized representation of something in the world.  Usually they apply these methods to predicting the outcomes of particle accelerator experiments or to designing new nanotechnologies.  But beginning around 1900, some physicists began to realize that the same broad collection of methods could be used to better understand almost anything, including financial markets.

Now, the basic idea here is to take some very complicated system—say, the whole universe, or a financial market—and make some strong assumptions that simplify the system.  For instance, we might assume that matter is uniformly distributed throughout space.  Obviously, this isn’t exactly true: there’s a much higher density of stuff on earth than there is in interstellar space.  But for some purposes, it’s a good approximation, just like it’s often a good approximation to treat a table as a smooth surface, even though it’s made up of discrete atoms and it’s mostly empty space.  Similarly, we might assume that markets are efficient—that is, basically random—as a starting point to develop some mathematics for thinking about markets.  And in many cases, making simplifying assumptions like this allows us to develop a detailed mathematical model of a situation that would otherwise be much too complicated for us to understand.

But this methodology is only as good as the assumptions we make.  And this means we need to be very careful about understanding when and why certain assumptions are reliable.  This is part of what went wrong in the years leading up to the 2007-08 crisis. There was a particular model that was widely used for evaluating certain assets known as Collateralized Debt Obligations (CDOs).  The model rested on an assumption that turned out to be very bad in weak housing markets.  A handful of investors realized this and adapted, but the vast majority did not, which is how the market for these products suddenly collapsed.

On the other side, the physicists, scientists and mathematicians’ influence on finance has brought positive things and solutions. Can you tell us about some of these contributions?

I think there are lots of things to mention here, but let me focus on just one.  One of the places where physicists and mathematicians have contributed the most concerns financial products known as derivatives.  Derivatives are financial instruments that are in some way constructed out of other financial instruments.  (Hence the name: they are derived from some other product.)  A familiar example of derivatives are options.  Options are contracts that give you the right, but not the obligation, to buy or sell some security—a stock, say, or a commodity—at a future time, at a price decided today.  An option like this has some value, since it may be that in the future, the market price for the security is (say) higher than the price at which the option entitles you to buy that security, which means you can use the option and then turn around and make a profit by selling on the open market.
The question is, how much value does the option have?  Answering this question was a major focus of work by physicists and mathematicians in finance in the first seventy five years of the twentieth century, and it was partly their success on this problem—the answer is given by a formula known as the Black-Scholes equation, published in 1973 but discovered independently by several people before that—that explains why banks started hiring quants.  More importantly, the kinds of ideas that went into the Black-Scholes equation opened the door to a much wider array of derivatives than had been feasible previously, because now, for the first time, there was a reliable (though not perfectly reliable!) method for pricing them.

Anyone who has followed the news over the last six or seven years would have heard a lot of bad things about derivatives, and might even think that enabling the creation of ever more complex derivatives in the way I just described is a big part of the problem, and maybe even the reason that physicists and mathematicians are sometimes blamed for the crisis.  And there’s surely a sense in which this is right.  But I think it misses the bigger picture.  Derivatives have been around for thousands of years, and for good reason.  They allow businesses to protect themselves against risk.  And the new derivatives that have been invented over the last 40 years or so have, by and large, been designed to give businesses even more flexibility in how they cope with the ordinary risks of doing business.  At the end of the day, this means that they can devote more capital to investing and building and less to guarding against the unforeseen.  In other words, derivatives have helped make markets more effective at their core purpose of moving capital from those who have it to those who need it as a way of fueling growth.

Reading your book, we found out about Jim Simons and the Renaissance Technologies Corporation. Can you tell us a little about him and his activities?

Jim Simons is probably the most successful mathematical physicist to have moved to finance, and he’s certainly the most successful one in finance.  He’s worth approximately 10 billion dollars. In the late 1980s, he and two other mathematicians—James Ax and Elwyn Berlekamp—started a fund now known as the Medallion Fund, which is now run by Renaissance Technologies, a firm Simons founded. Simons and his colleagues used ideas from signal processing and machine learning to develop some of the first algorithms for what is now called high-frequency trading, a strategy that involves making millions of trades at fractions of a second. No one knows exactly what Renaissance does now—they are extremely secretive—but they have continued to be extremely successful.  In 2007 and 2008, for instance, when the rest of the financial industry was floundering, the Medallion Fund returned 73.7% and 80%, respectively.

The Prediction Company’s origin also got our attention. Can you explain about how they predicted market and financial behavior based on roulette calculations?

The Prediction Company was a Santa Fe-based investment company founded by two physicists, Doyne Farmer and Norman Packard.  Farmer and Packard were pioneers in the fields of non-linear dynamics and non-linear forecasting—also known as “chaos theory”.  During graduate school at the University of California, Santa Cruz, Farmer, Packard, and many of their friends used the ideas they were developing to understand complex systems in physics to build a computer that would predict where a roulette ball would land.  The computer was designed so that you could wear it into a casino.  Later, they were involved in founding the Santa Fe Institute, a leading research center on complexity theory.  In the late 1980s, the Santa Fe Institute held a series of conferences on complexity in economics, and Farmer and Packard realized that their ideas about chaos and gambling could be applied to markets.

Physics, as Newton said, cannot predict the madness of men. What do you think are the upcoming dangers that mankind can face in the near future?

I think that firms like Renaissance Technologies and the Prediction Company have shown how ideas from physics and mathematics can be used successfully in finance.  But I think that the way in which the models quants have produced failed us in 2007 and 2008 deserves much more focus.  As I said above, the problem was that essentially everyone in the industry used the same model, apparently without recognizing the ways in which that model was based on certain assumptions.  This meant that when those assumptions went bad, the industry got into a lot of trouble.  I take this to be a misuse of the models.  And I haven’t seen much evidence that the industry has learned from their mistake.  If we are going to use mathematical models in finance—and I very much think we should—we need to be much more attentive to the kinds of approximations and simplifications that are implicit in the models, and keep our heads up for the ways in which those assumptions will fail.

Do you think physicists and mathematicians can come with a solution or system to avoid such calamities before they take place?

No.  I think there are always going to be disasters that we won’t be able to predict, and I think it would be a huge mistake to imagine we can come up with some mathematical model that is going to work under all circumstances or predict all calamities.  But I do think that many crises and other problems are predictable, and I think that many failures of our models can be anticipated, too.  And the fact that we won’t be able to predict all future crises certainly doesn’t mean we shouldn’t try as hard as we can to predict and avoid as many of them as possible—as long as we remain modest about what we can realistically hope to accomplish.  The problems arise when we assume that we have some tool than never fails.